Our story as written by Bruce Ingram in an article that ran in Bassmaster Magazine in February 2017. 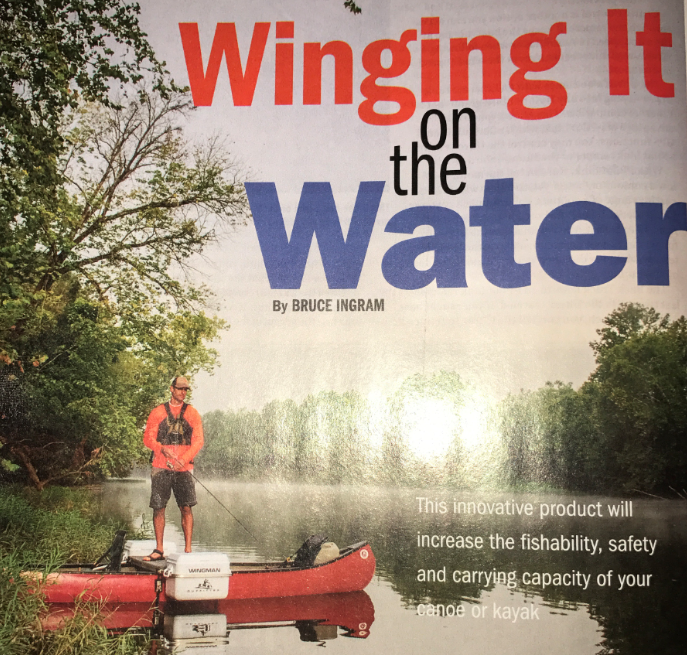 Winging It on the Water

At first glance, a river runner might look at the Wingman Cooler Outrigger and wonder how on earth this contraption could be navigated down a waterway, especially one with major rapids. A 72-inch long, 24-inch wide frame rests astride the gunnel of a canoe. On both sides of the frame exist slots where coolers, gear boxes, dry boxes or some other container can be dropped. The end result is a boat that looks very little like the craft used to ply rivers.

Yet, amazingly, the concept not only works, but it also may even be said to revolutionize and enhance canoe and kayak fishing – especially if anglers relish going on multiple day floats for bass and other species. Austin Bousman, co-founder of the company, explains the genesis of the product.

“My good friend Bernie Lipke, a professional handyman in Montana, came up with the original concept,” he says. “He needed a place to position his coolers for a weeklong trip down the Missouri River. So he put some 2x4s across the gunnel, bolted two coolers on the ends of the boards that were hanging out over the water and took off.”

Lipke decided to experiment with the concept, exchanging a steel frame for the wooden 2x4s. Fascinatingly, Lipke, Bousman, and co-founder Drew Arney learned that the concept not only worked but also provided other benefits as well. “

The coolers gave stability to the canoe by placing the weight outside of the boat. Like a tight rope walker carrying a long pole, the product provides initial stability through weight distribution.  Secondary stability occurs when the boat leans to and the cooler hits the water allowing buoyancy to take over.  Due to the added stability we were able to carry more gear safely and comfortably.]

“As the product evolved we added a platform for sitting on, fishing from, or a place for pets and kids to enjoy. In addition to these features, we designed a bracket that allows the Wingman Outrigger to turn into a camping table when removed from a boat. I have well over 2000 miles of river testing from Montana to Virginia and am convinced that the product is an excellent concept.”

Bousman, who lives in Roanoke, Virginia, says that gear hounds will especially like the Wingman Outrigger as it essentially turns a boat into an outrigger and frees up space inside the craft for fishermen to bring along more tackle, camping gear, or even to turn an outing into a cast and blast affair. Bousman especially likes to go on canoe-in hunting trips into the backcountry and as employed the invention as a means to haul a big buck down a waterway – something he has accomplished while paddling into wilderness areas.

A Wingman Outfitter set-up also can be a cost saver.

“Many river fishermen feel that they need a raft if they want to go on days long float trips,” he says. “And a good raft could easily cost more than $5000. With this outrigger, you can turn a $200 used canoe into a craft that may be just as useful as a raft and that can essentially do everything that a raft can do for thousands of dollars less.”

The question remains, though, how would a Wingman Outrigger equipped canoe be maneuvered through narrow slots in a river’s boulder field?

“If the slot between two boulders is only a couple of feet wide, the product is not going to make it through that small of an opening nor will any raft,” says Bousman. “No watercraft can make it through an opening that is narrower than it is. If the Wingman Outrigger is going through a tight area with, for example, a boulder on the left, the fishermen should lean to the right, which causes the part of the outrigger hanging over the left side to rise up and pass over the rock.

Bousman adds that the casting platform is one of his favorite aspects of the product. As a fisherman himself, Bousman prefers to stand up when fishing as he feels that improved vision, casting accuracy, and a better hookset occurs. With the Wingman Outrigger the Virginian can stand on the products platform and reap that advantage.

I field tested the Wingman Outrigger on a trip down Virginia’s James River last September with Bousman and his friend Jeff Tester, a Moneta, Virginia contractorand Wingman Outfitter customer who had not yet tested his Cooler Outrigger on the water. Bousman and I were in a 16-foot canoe while Tester was in a 12-foot kayak. When river fishing in my canoe, I remain upright the entire time (except when passing under trees or coursing through rapids) by standing straddled while positioning my feet where the bottom of the boat begins to curve upward. With the Wingman Outrigger, this was even easier to accomplish, even if someone is not used to being upright in a canoe.

I also was really interested in using the outrigger as a casting platform. Bousman explained that standing in the middle of the platform with my rear foot positioned at a right angle to the front one was likely the stance that would give me the most stability – and he was right.  The foot or two increase in elevation was even better than when I stand in the bow concerning the ability to help me select underwater cover and structure to cast to.

While Bousman and I took turns fishing from the platform, he explained that the more weight/gear inside the coolers, the more stabile a fisherman would feel while on the platform. Tester likewise relished the steadiness that the platform provides.

“The only time I’ve ever felt safe standing up in my kayak is when I’ve been fishing on a lake,” he said. “But with the Wingman Outrigger, I feel super stable standing up. Two of the major drawbacks when sitting in a kayak is not being high enough to see all the best places to fish and not having the leverage to get a good hook set. The product eliminates those problems.”

The James float I selected flaunts one of the worst rapids on the upper river, the Squeeze which is truly the narrowest part of the entire waterway as a hillside and rocky shoreline combine to force the river through a slot less than 20 yards wide. Water rushes through this tiny passageway at a furious pace but both Bousman and Tester deftly navigated their respective craft through the Squeeze, and I witnessed the secondary stability that the former earlier had alluded to. The secondary stability ability was also in evidence one time when Bousman leaned to his right – and thus caused the left side of the outrigger to rise upward – when we needed to glide over some rocks.

There are multiple real problems this product helps to solve maintains Drew Arney.

“To test this products functionality and durability we have shot shotguns, brought big game out of the woods, done multi-day canoe camping trips in the snow, hit Class III rapids over and over, fly fished from the platform, had 100-plus- pound dogs jump into the water from it,” he says.

“And we’ve hit golf balls off the platform, and done back flips off it, too, and the list goes on. What we have not done is slap a couple coolers to the side of a canoe and called it a novel idea people may waste their money on.  We have stumbled onto and ambitiously pursued an idea that will eventually create a whole new market for the canoeist or kayaker who wants to do more on the water than paddle a boat downstream.”